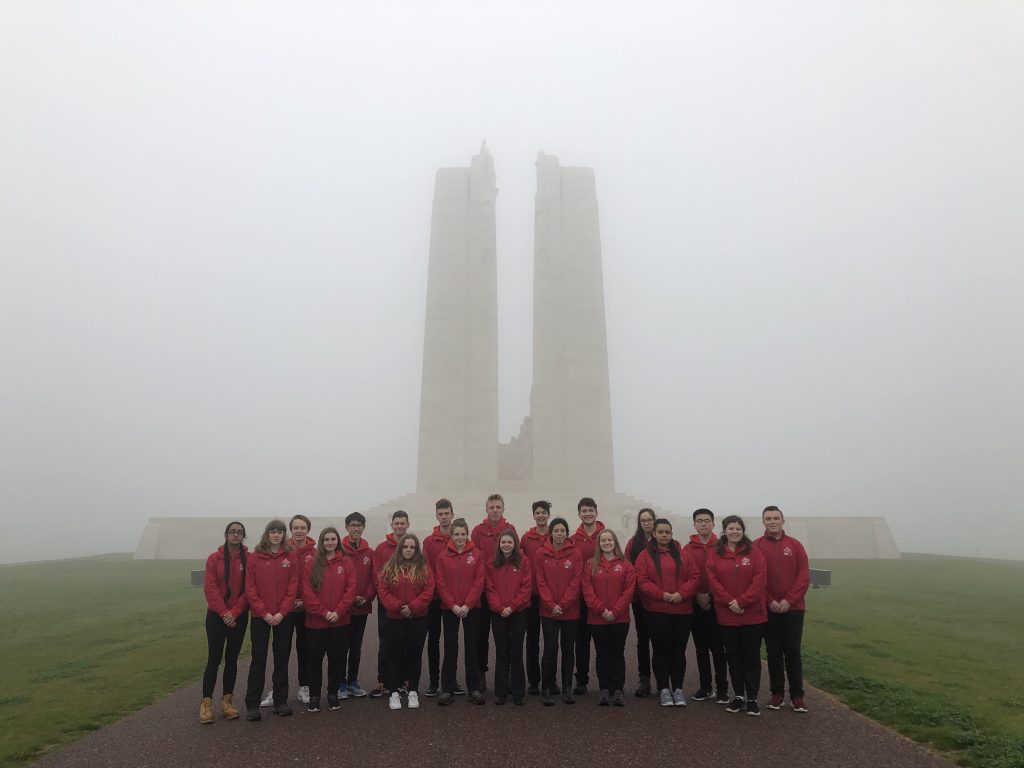 Today was an amazing day to finish the 2019 Vimy Pilgrimage. It started off with visiting the Memorial at Vimy Ridge, which has always promised to be one of the most spectacular sights of the program, and it did not disappoint. Many people who I spoke to before about their Vimy experiences said that seeing it can change your life, fill you with emotions, and overall profoundly impact you. I can now say this for myself, as today’s experience has been incredible. When we arrived, we took half an hour to experience the monument alone, undistracted by phones and people. During this time, I took time to reflect on why the monument is so incredible, and quickly realized it is not about the monument itself, but what is represents. 3,598 Canadian soldiers died on April 9, 1917 at Vimy, and 102 years later for so many young people to be in that very place, thinking about their sacrifice, is a testament that their memory will not be forgotten. Today near the end of the day I also had the most important part of the program for myself, which was visiting the grave of my relative Alfred Snow Churchill who died on April 9, 1917. I am one of very few, if not the first family member to visit his grave, and it is an experience I will always cherish.

April 9. Vimy Day. The final day of the program. For myself, the day of my second, original soldier presentation. Private Fenton Brownell is the solider I wrote about in my application to the Award, and the soldier that helped to bring me here. After the Battle of Vimy Ridge Ceremony, we headed to a few cemeteries to finish up soldier presentations. Entering Nine Elms Military Cemetery in Pas-de-Calais, I could not help but feel slightly emotional as I knew that Brownell was now nearby. To see his grave, as well as that nearby of his brother, Charles, was a moment at which I realized I had been anticipating since I first found out that I would be heading to Europe. Detailing the life and death of Fenton and his brother, as well as another buried elsewhere, was something I can describe only as heartbreaking. I could never imagine losing two family members on the same day, and a third just months later. Reading aloud the fictional letter I wrote from Fenton’s mother to him, I felt my eyes water as I knew that while the situation I described may not have been a reality for the Brownell family, it surely occurred for many families affected by the Great War. I hope that by telling these stories and ensuring the legacies of soldiers are never forgotten, we can prevent such events from occurring again in the future.

Today marked the 102ndanniversary of the start of the Battle of Vimy Ridge, a battle that would go down in history, textbooks and even passports alike. The whole week that we were in Europe, we learned about the importance of this battle as well as the history, controversy and debates behind the First World War. For the events today, the ceremony seemed surreal. I’ve seen the ceremonies, the events all on TV but to be there in person with the armed forces, dignitaries and veterans, it was truly an amazing experience that I will not forget. It was also a great feeling to finally hear our tour guides speak with a Canadian accent! Standing there at the memorial, it felt Canadian. The mist, the fog in the air resembled what I would typically see in British Columbia. It felt like home. I always try to imagine and put myself in the shoes of those who’ve been through these battles and these experiences. I certainly felt as if I was at home, standing on top of the carefully carved stairs. Maybe, I imagine, those soldiers would feel the same. Across the Atlantic, maybe, the battles felt Canadian. At the end of the day, today was an experience and a time of reflection for myself as well as my peers. Sometimes, we need to feel as if we were home in order to fight a battle far from home.

David He, Burnaby, BC

Today was the pinnacle of the Vimy Pilgrimage program. Although I was aware of Vimy’s legendary status as the “birth of a nation”, I wasn’t expecting to be so profoundly affected by the sight of the monument.

It was like a living thing, rising out of the fog. Plaques read around the pillars: dates, battles, names. Distantly, a bell tolls.

As I stood there with these people I have mourned with, celebrated with, learned with over this past week, I was struck by the sudden realization that this is ours.

In a time where all of our First World War veterans have passed, this is our history to live or let die. The past is written here, in the stone and the grass— its trauma and its truth. How do we give that meaning? How do we reconcile past and present— present and future?

We gather in a circle around a headstone in a cemetery along a dirt road and learn about a life now long gone. We stand in a trench and hold an umbrella over each other’s heads. We descend eight meters down and trace stone once touched by people we once knew.

I didn’t realize how much I had grown until standing beside Mother Canada at the peak of the Vimy Memorial.

Before this journey, I did not believe that I had a place in Canadian history. Then I met Private Vincent Carvery and Private Aubrey Mitchell of the Canadian Expeditionary Force’s first and only Black battalion.

They created a space for me in history. They are the reason why later, I was honoured to present the Commitment of Remembrance at the ceremony. As I overlooked the audience, I felt a swell of pride to be here on equal ground representing their legacy. As I gazed at my fellow participants, each symbolically holding with them soldiers or nursing sisters, I felt the weight of all their legacies now on our shoulders.

I realized today that it’s not about the Battle of Vimy Ridge at all.

The people we carry with us, the places we trace steps— the story that we are creating together.

This is the power of the Vimy memorial.