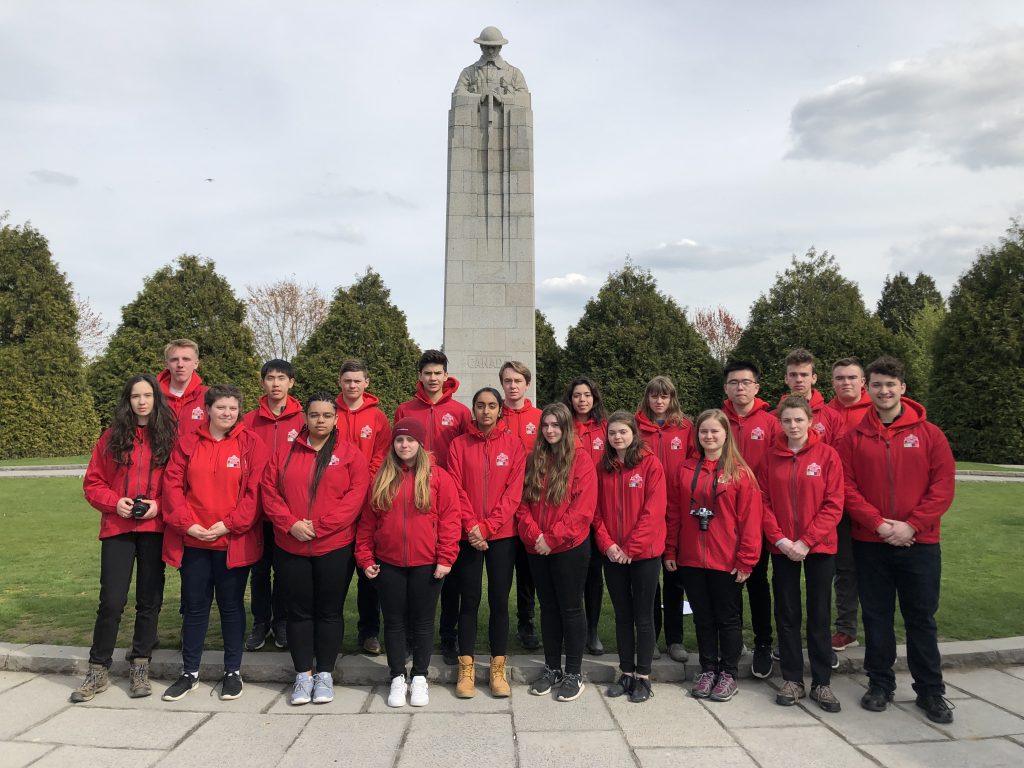 The poem “In Flanders Fields” is known by people from all over the world. Maybe it’s because of the descriptive language used to describe the horrid sights of the war. However, regardless of the reason behind the popularity of this poem, the one thing we can identify for certain are the words in the poem remain the same.  The perspective we have on what the words mean and signify, however, differ. At the Menin Gate ceremony tonight, the song “In Flanders Fields” was sung by a choir. I noticed that it was performed differently by this group of students than the choir of which I am a member of. This evoked a thought that led me to form an interesting analogy. Even though the words of the song remain the same, there are so many different ways in which they can be sung. Just as the soldiers in war, the different groups, whether they be the allies or central powers, had contrasting experiences due to their location and varying perspectives. Yet, they were all fighting for similar things: their families and countries. Just as the words of this well-known poem, the reason these people sacrificed their lives by participating in the war effort is quite the same. When talking about history, the opposing armies are often described as fighting against one another, when in reality they were fighting for a common goal. This was a great epiphany for me which is one of the reasons the ceremony at Menin Gate was so important to me.

For me, the most moving and impactful experience I have had exploring Belgium would probably be visiting the German war cemetery Langemark. This had a powerful impact on me as it showed that the Belgians found a good balance between respect and condemnation. The Belgians were able to lease their land to the Germans so that the Germans can properly bury their casualties. While that respect was shown, they also tried to condemn the Germans actions by only letting the Germans have a modest location for their burials.

Another vital take-away I got from visiting this cemetery was how most of the soldiers were just like me, with the exception of the year they were born and the circumstances in which they were born into. I very well could have been of German descent and could have fought in the great war. Many of these soldiers were close to the same age as me, which really opened my eyes to some of the emotions these soldiers were faced with. I know if it were me, I would feel very uncertain and scared, not knowing if I would see tomorrows sunset.

As I marvelled at the beauty of the red and white flowers of the wreath I was carrying, the buglers played familiar notes. This evening, at the Menin Gate, the Last Post warmed the hearts of many. Myself and two others were given the opportunity to lay a wreath on behalf of the Vimy Foundation. The entire ceremony was amazing. A choir sang as we laid our wreath alongside other wreaths from other countries and educational groups. It was a great honour and it allowed me to show my respect to three soldiers from my community who are commemorated on the Menin Gate. One soldier in particular, Private Augustine John Fehrenbach, drew many emotions. A family from my home town lost their great uncle in the First World War and never had the opportunity to visit his name. Knowing how happy and grateful the family would be if I returned with a rubbing of his name, built my hopes. I knew the odds of being able to reach his name were slim. However, I was very pleased that I was able to reach his name. Upon finding Private Fehrenbach on the wall, I was so overcome with emotions of all sort that I began to cry. I was speechless and even though I had shared no personal connection with this soldier, I was honoured to take a rubbing of his name and I am very excited to return my rubbing to his family for them to cherish. Tonight, I was very proud to lay a wreath on behalf of the Vimy Foundation, Canada, and for Private Fehrenbach.

On our first day of this program, our chaperone, Sara, asked us to think of one word that we would use to describe the First World War. I chose “meaningful” because the war has changed our world in so many ways. Today, we saw the Christmas Truce Memorial. One of the ways this was meaningful was because it showed that these men were not just people who fought in the war, they were human beings that had families and loved ones back home. This also showed that the war wasn’t always about killing and winning. When our tour guide, Roger, was talking to us about this site, he said that the soldiers’ trenches were so close to each other that they could hear what the other men were saying to each other. The men also tried to make the Christmas Truce happen by missing their shots of their guns or telling the other soldiers that someone would be coming and where to go for safety. This site was very meaningful today to me because I realized how much of the war I didn’t know. This is why I chose the word meaningful for our first day of the program and I will see this time and time again.

Andrew Poirier, York (Hamlet of) ON